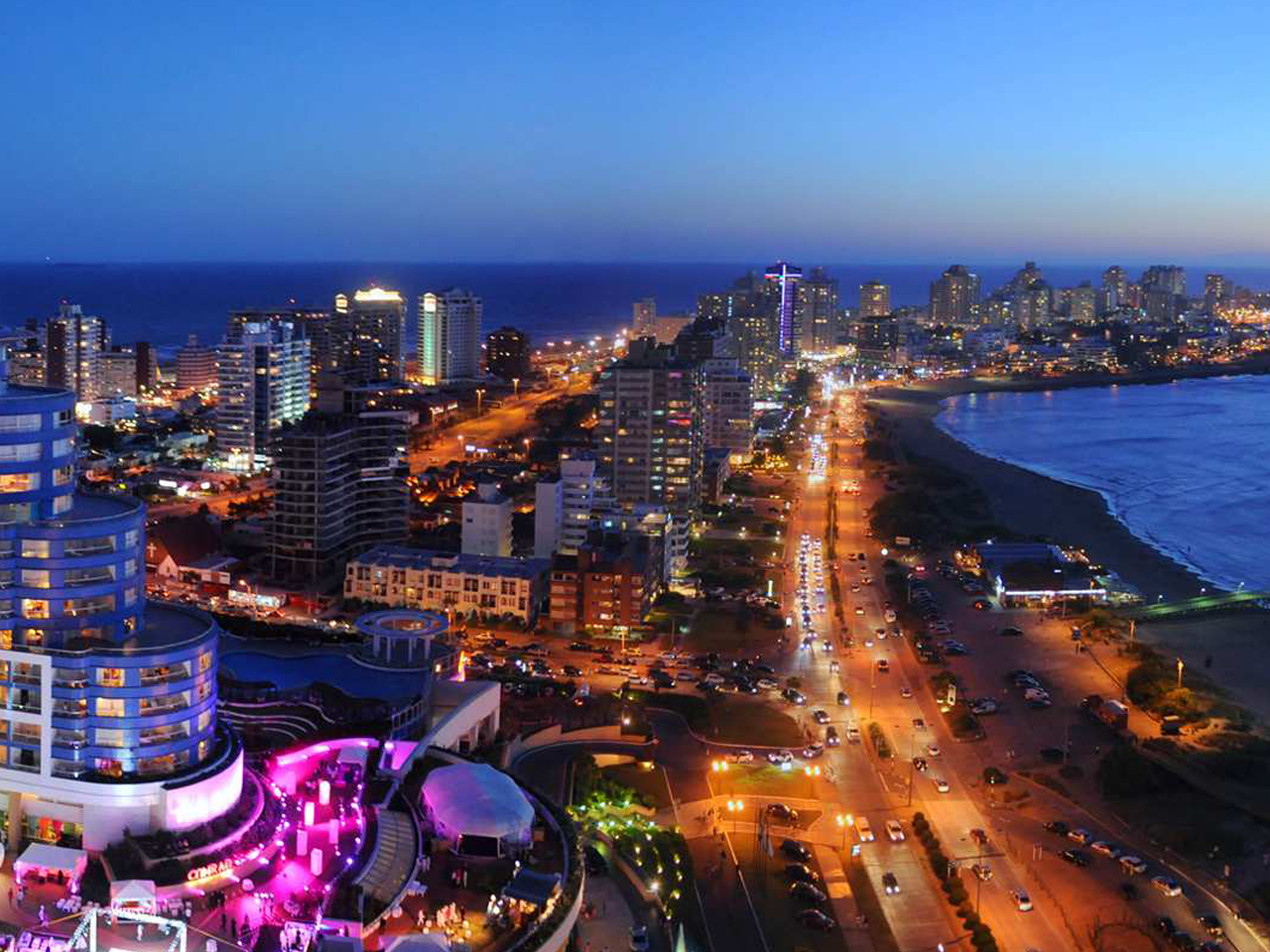 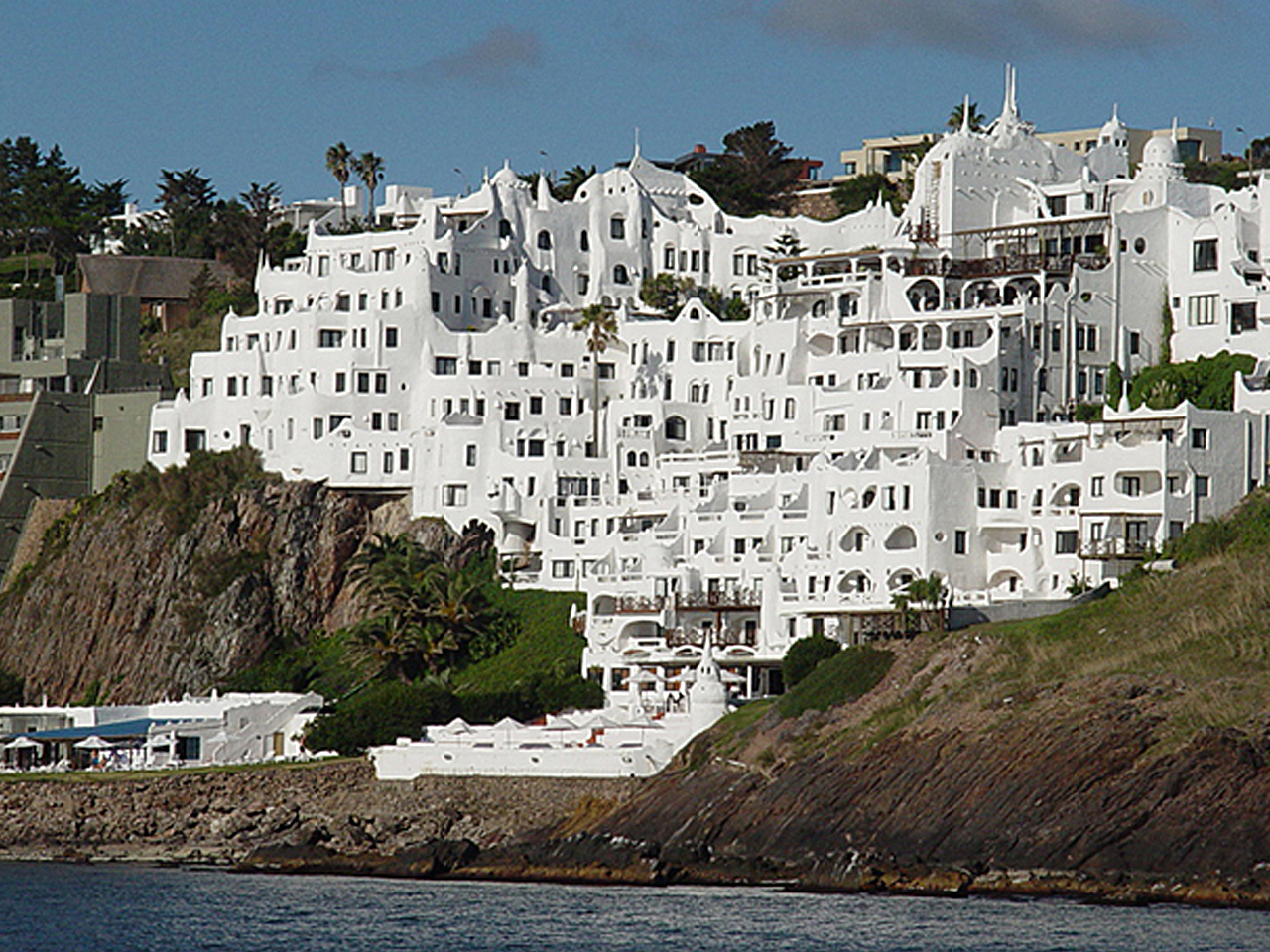 Punta Del Este is by far the most frequently visited resort in the country and is regarded as one of the best ones in the world. Over 60% of the foreign currency that enters Uruguay from tourism comes from Punta Del Este and over two-thirds of its visitors arrive during the summer months (particularly during the last week of December and the first week of March). There are around 10,000 inhabitants throughout the whole year whilst in high season over half a million people visit the area; most of them Argentineans. The name “Punta Del Este”, comes from a city founded a hundred years ago (nowadays known as the “Peninsula” Area) which was located where the waters of the River Plate meet the Atlantic Ocean.

Nowadays the area has grown both to the east and west mostly because of the large-scale investments and so many new areas have now been integrated to what is nowadays known as Punta del Este: Punta Ballena and Solanas, the Mansa beach, the Brava Beach, the Peninsula, La Barra and Jose Ignacio are some examples of this.

Punta Ballena, Solanas, and Laguan del Sauce Areas:
The “Sauce Lagoon” with 5,000 hectares is the largest fresh water reservoir in the province of Maldonado. This super exclusive residential district offers an incredible landscape, next to the sea, with incredible views of the lagoon and surrounded by hills such as the “Sierra de la Ballena”, a rock formation that stretches from the lake to the sea that offers a unique, not-to-be-missed panoramic view of the hills, woods, lakes, cities, beaches and islands of the area. This is also where the charming “Las Cumbres” is located, a small and special hotel which was born as a tea house and one of the best alternatives for a romantic weekend in the area! Carrying on along the road towards the east you will reach Solanas, Portezuelo, and Punta Ballena where you will find the lookout point on the top of the lomo de la ballena (the whale’s back) from where you can admire a spectacular view of the bay.

Playa Mansa & Playa Brava
The peninsula is formed by two strings of beaches, the Mansa Beach and the Brava Beach and each one of these strings of beaches are marked with “Paradas” (Stops that are marked as a way of orientation). Parada 1 starts on the point of the peninsula, where the main square is situated and goes on to one side and the other (Mansa Beach and Brava Beach). The Mansa (calm water beach) is recognized by its calm and salty waters; this strand of coastline goes from the peninsula downtown (Parada 1) to the Pinares Ares (Parada 40). From this beach, you can spot the “Gorriti Island” that closes off the Maldonado Bay between Punta Del Este and the heights of Punta Ballena. It is one kilometer and a half long by eight hundred meters wide and offers two lovely beaches named Puerto Jardin and Playa Honda where you can spend the day, have lunch and sun bathe. The Brava Beach (rough water beach) is the generic name given to a string of ocean beaches starting to the east of the peninsula in front of the “Paseo de las Americas” sculptures, the most famous of which is “La Mano” (the hand) created by a Chilean sculptor called Mario Irarrazabal. This coastline ends where the Maldonado stream flows out into the sea and where the winding bridge of “La Barra” is located.

The Peninsula
The area known as “The Peninsula” corresponds to the very point where the downtown area is located together with the port, the main street “Gorlero” which splits the peninsula in two. If you enjoy window-shopping or if you just want to find a nice spot in a café or a snack after a day on the beach, then a stroll down this street at sundown would be a great idea! On one end of the avenue, and only a few blocks from the bus terminal, the resort’s oldest casino (Nogaró) is located. Some more blocks after the casino, the Artigas Square is located where a lovely art craft market is organized each summer where assorted articles from wood, bone, glass, semiprecious stones (quartz and amethyst), sundry metals, fabrics and wool and be purchased. In this same square you will find musicians, artists, jugglers and puppeteers performing their shows and a permanent art exhibition. The port area constitutes a pleasant family promenade during the day and one of the busiest parts of the resort, full of lovers of fine cooking and young people looking for live music and entertainment during summer nights. It is just a few yards from the jetties where cabin cruisers and fishing boats tie up in the shelter of the natural breakwater presented by Gorriti Island lying just over a mile off-shore; there are many restaurants and pubs in the area that offer excellent quality and different options. 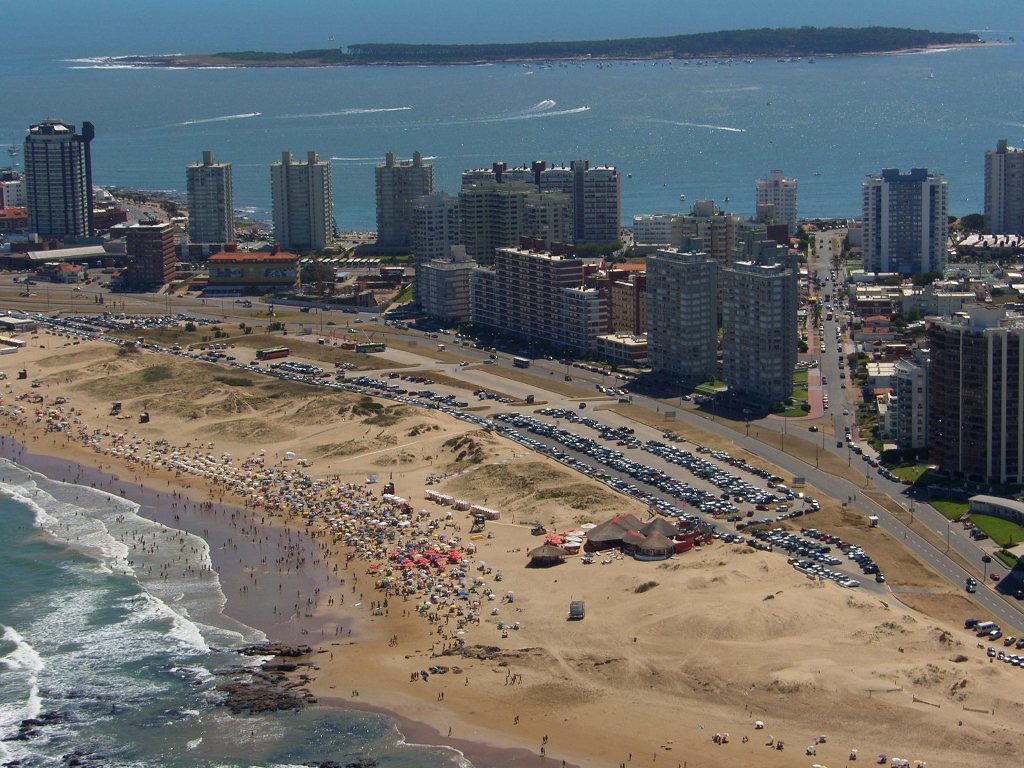 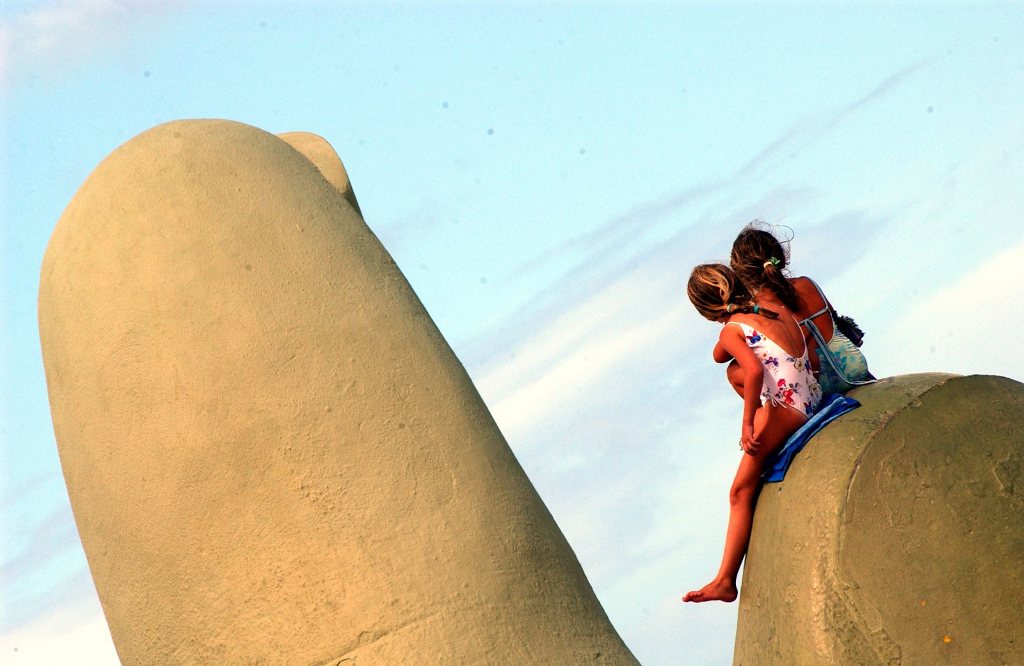 Museo Ralli
Founded in 1987 by the Italian banker, Harry Recanati, and located in the heart of Punta del Este’s exclusive Beverly Hills neighborhood, the Museo Ralli gathers the largest collection of Latin American painting and sculpture in the world.

Lobos Island
Located eight and a half kilometers off the coast in the Atlantic Ocean and facing Punta Del Este’s Playa Brava beach, the “Lobos Island” (Wolves Island) is Uruguay’s southernmost point. Before a lighthouse was raised in 1906 on this rocky, barren platform of just over 40 hectares, it was witness to dozens of shipwrecks. The island has a colony of sea lions that is unique in the world for the quantity and variety of species and is also the second largest sea lion reserve in South America. In this island you can find the only remaining examples of the “arctoce phalus australis” species, commonly called “lobo fino” (South American fur seal) that inhabits the rockiest part of the island. Until the second half of last century, the Uruguayan state itself used to kill these animals to sell their skins but nowadays, they are a protected species.

La Barra de Maldonado
Formerly a small fishing village settled on the banks of the Maldonado stream, La Barra has grown to be a seaside resort with plenty of spirit and special characteristics which have turned it into the favorite spot for young people because of its teeming nightlife. La Barra starts just after the striking humpbacked, Reinforced Concrete Bridge, built by the Uruguayan engineer Leonel Viera in 1965, on the estuary formed by the stream as it runs into the ocean.

José Ignacio
Only 40 kilometers east from Punta Del Este and located between two lagoons, you will find the village of José Ignacio. It is the last town on Maldonado’s Atlantic coastline and the last to be discovered and treasured by a select and wealthy group of Argentineans who set up their summer residences there. It is a rocky headland that juts almost a kilometer into the sea forming natural bays on both sides with white sandy beaches and two landmarks: the 32 meter high lighthouse built in 1877 and a sunken boat. José Ignacio owes its name to one of the first settlers in the area during Spanish colonial times and is considered to be one of the best fishing spots either from the shore or from a boat. The area was famous in the eighteenth and nineteenth centuries due to the maritime tragedies that took place on the rocky crags. It has two beaches and still maintains the cozy atmosphere of a former fishing village with cobblestone streets, low houses, and no towers rising to compete with the lighthouse. On the two lagoons of Garzón and José Ignacio that surround the peninsula, you are allowed to wind surf, row and sail but no motorized water sports are permitted in order to protect the wildlife that inhabits the zone. The elegant, black-necked swans and different species of herons with their varied, colorful feathers are the queens of these waters. 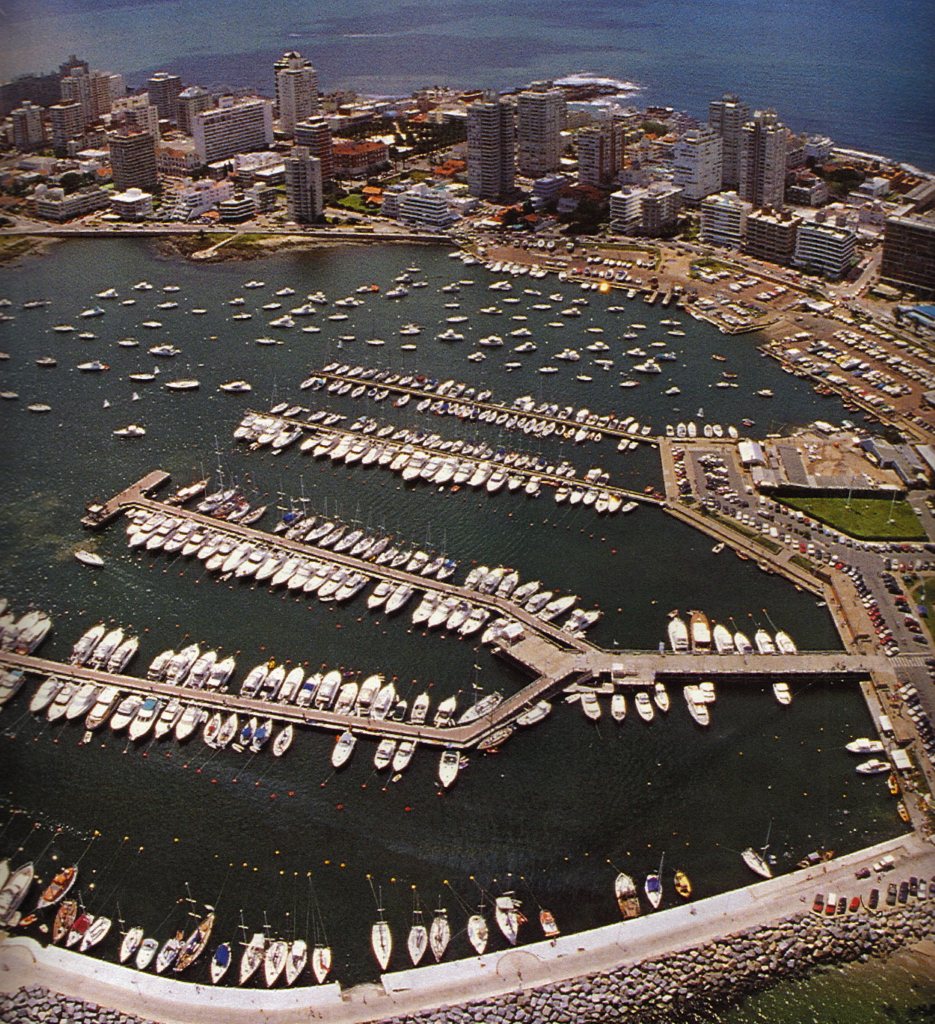